The Game of Rassilon is one of those “actual-play” podcasts, except instead of playing D&D or Pathfinder we’re playing the Doctor Who Roleplaying Game by Cubicle 7. Telling stories with a unique Doctor exploring time and space with a crew of unlikely companions, with an emphasis on great stories and, we hope, big laughs.

About the Doctor Who RPG 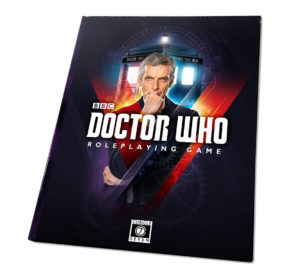 The 2015 edition of the Doctor Who Roleplaying Game. Is the Twelfth Doctor looking contemplative, or just biting his nails? We may never know.

The Doctor Who Roleplaying Game was created by Cubicle 7 – y’know, the team who do Warhammer Fantasy Roleplay and the Lone Wolf Adventure Game. It was first published in 2009, and has been revised and reissued a handful of times over the years. The latest edition was released in 2015, and features Peter Capaldi’s lovely face on the cover.

DWRPG uses the Vortex System, which places emphasis not on combat but on problem-solving and collaborative storytelling. Players are actively encouraged to talk or think their way out of a situation, and the system is weighted in favor of these avenues. What’s more, players are given a number of Story Points – kind of like Inspiration in D&D, only much more powerful – which can be used to influence the story for their own benefit… or perhaps just to make it more interesting!

This means that the story isn’t just in the hands of the gamemaster. The players have a great deal of control over the outcome of an adventure. But they still have to use their wits, cunning, and intellect to get out of a scrape. Especially if they run out of Story Points…

Interested in playing yourself? You can purchase a physical copy of the Doctor Who Roleplaying Game from your local gaming store, or online from a number of book retailers. You can also purchase a PDF version of the book from DriveThruRPG.

Recorded remotely to stay safe during the Pandemic

For our first season, and a good chunk of our second, we recorded in-person and on-location at Geeky Teas in Burbank, California, where we took up a whole bloody game room in their store for an entire afternoon to record the show thing away from our cats, roommates and low-flying aircraft. Due to the COVID-19 Pandemic, however, we switched to remote recording in April 2020.

However, Geeky Teas is still open! The store is Burbank’s premiere location for tabletop gaming, geek-themed teas, and they also have a cat rescue called GeeKitties. You can learn more about the store, or make a donation to the cat rescue, at GeekyTeas.com.

The Game of Rassilon is a not-for-profit fan-based production. We claim no ownership of Doctor Who nor any affiliation with the BBC, BBC Studios, or any of its affiliates or licensees. As with other fan-productions such as fanfilms, fanfiction and fan-produced original audios, this podcast is made out of a love of Doctor Who, a desire to tell stories in that universe, and a want to play in that sandbox. No infringement of trademarks is intended, and we promise to rake the sand back nicely when we’re done.